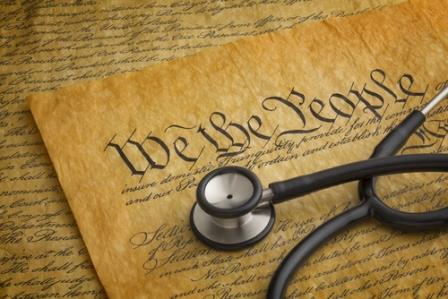 Two adverse decisions came out within hours of each other on Tuesday. Both rulings attempt to interpret certain text within the Affordable Care Act.

A section of the law reads that tax credits would be available to individuals "enrolled through an Exchange established by the State."

But only 14 states opted to set up their own exchanges, while 36 used the federal government's famously bugged Healthcare.gov. In May 2013, the Internal Revenue Service decided to treat people in federal-exchange run states as eligible for the subsidies, though the matter had never been clarified by the judiciary.

In Halbig v. Burwell, the D.C. Circuit Court of Appeals ruled that the IRS cannot provide subsidies to states that opted to use the federal healthcare exchange.

Less than two hours later, a contradictory ruling was released by Richmond's Fourth Circuit Court of Appeals in King v. Burwell. It interpreted the spirit of the text to mean that the tax credits should apply to all the states.

The parties against giving state subsidies under Obamacare were comprised of a group of small business owners. They argued that the IRS was improperly enforcing Obamacare's mandates. They said that Congress intended for tax credits to go only to people in states that set up their own exchanges, as a "carrot" to entice states to support Obamacare.

Here's what the different rulings could mean for Americans - and for American businesses - in coming months...

The Halbig ruling could mean that some 4.7 million Americans who received subsidies via the federal exchange could lose them. It also means that approximately 250,000 businesses may not be forced to provide employee health coverage. That's because some employer penalties are only triggered when employees qualify for the subsidies in question.

But the Obama administration has said it will appeal Halbig.

"You don't need a fancy legal degree to understand that Congress intended for every eligible American to have access to tax credits that would lower their healthcare costs . . . I think that was a pretty clear intent of the congressional law," White House Spokesman Josh Earnest said in support of the King ruling.

Halbig supporters question why Congress didn't incorporate that into its text, if that's the case.

In fact, The Wall Street Journal reported that MIT economist Jonathan Gruber, who helped write Obamacare and is one of its most notable defenders, was quoted in 2012 saying that "if you're a state and you don't set up an exchange, that means your citizens don't get their tax credits." He also said "I hope that that's a blatant enough political reality that states will get their act together and realize there are billions of dollars at stake here in setting up these exchanges."

What is certain is that this means...more uncertainty.

"It's probably another year before this works through the courts. If it goes to the Supreme Court, it could be well into 2015. But if you're a company, you need to take ACA compliance very seriously at this point," ADP vice president of strategic advisory services Christopher Ryan said to Inc.

A nearly identical case is pending before the U.S. Court of Appeals for the 4th Circuit in Richmond. The case has been brought forward by four individuals aiming to block Obamacare subsidies from Virginia's insurance marketplace.

Additionally, state officials in Indiana and Oklahoma have filed similar lawsuits. Both are pending court hearings.

Last month, the Supreme Court issued a decision in Hobby Lobby that said some employers may opt out of Obamacare's requirement that health insurers pay for contraception.

Wherever Obamacare ends up, Americans should be prepared to be blindsided by a barrage of new healthcare-related taxes - the bulk of which will be passed on to the middle class...