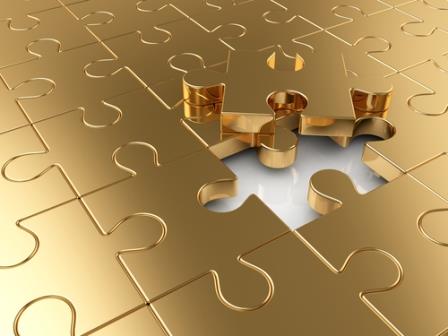 Gold market news, July 31, 2014: On July 25, South Africa's Rand Refinery – the biggest processing facility for gold in Africa and one of the largest worldwide – announced it will receive a shareholder loan to make up for "lost" 87,000 ounces (2.7 tons) of physical gold in its inventory. The press release describes what amounts to a $112 million loss at current gold prices.

Rand Refinery typically processes around 380 tons of gold annually. Since its founding in 1920, it has refined approximately 50,000 tons of the yellow metal – nearly one-third of the world's total gold mined worldwide. It's also the largest integrated single-site precious metals refining and smelting facility on the globe.

According to Rand's July 25 statement, the refinery could not draft its 2013 annual report due to an error in its recently adopted "enterprise resource planning" (ERP) software.

"Following the adoption of the ERP system in April last year, Rand Refinery experienced implementation difficulties which have led to a difference between the actual inventory and the accounting records of approximately 87,000 ounces of gold. Uncertainty around the true position has prevented the Company from being able to finalise its annual financial statements for the financial year ended 30 September 2013. This information has been shared with the Company's regulators, shareholders, insurers and banks. Rand Refinery's operations are unaffected by this matter and the processing of gold continues at full capacity."

Rand "requested financial assistance from Shareholders as a precautionary measure, should resolution of the difficulties result in a financial loss for the Company."

According to Sibanye Gold spokesman James Wellsted and reported by Business Report, customers of Rand have received the prices they were expecting, leading them to conclude the missing gold is indeed most likely an accounting problem, rather than theft.

The vanishing of 2.7 tons of gold from Rand's inventory on a computer error is the second time the refinery made big gold market news this year…