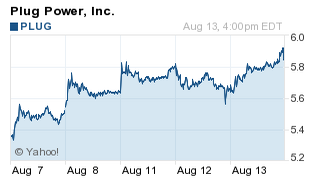 Behind Plug's strong quarter was a robust rise in demand from customers including Wal-Mart Stores Inc. (NYSE: WMT). The world's largest public company uses Plug's hydrogen fuel cells to power forklifts. Plug confirmed it deployed its first hydrogen fuel cell unit at a Wal-Mart site in the second quarter. Wal-Mart has placed orders for such units at seven sites.

Additional customers including shipping giant FedEx Corp. (NYSE: FDX), and auto titans Daimler AG and BMW AG, Honda and Volkswagen, which use fuel cells to power forklifts and other material handling devices at their warehouses.
Plug shipped 687 fuel-cell units in the quarter ended June 30, beating the 650 it had earlier forecast.

"The Company has secured GenDrive and GenKey deals with Volkswagen, BMW, Mercedes-Benz and Honda. The Company expects that success within the auto-manufacturing market will open up a plethora of global opportunities as these customers standardize on hydrogen fuel cells to power the electric lift trucks at their manufacturing sites worldwide," according to Plug's earnings release.

Plug Power remains extremely upbeat, saying it expects "a plethora of global opportunities" from the auto-manufacturing market as its customers begin to use hydrogen fuel cells at manufacturing sites worldwide.

PLUG stock caught Money Morning's eye in January and we followed its progress through Q1 as it ignited the fuel cell sector.