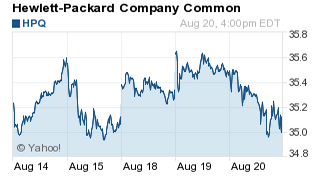 Here's a quick look at the quarter's highlights.

Revenue rose to $27.6 billion, handily beating the expected $27.03 billion. Revenue was expected to come in at $27.03 billion, slightly lower than the $27.23 billion reported in the year-ago quarter.

The Palo Alto, Calif.-based company is still working on a determined internal overhaul, aimed at goosing sales and polishing its image. The company's efforts appear to be slowly working.

The company continues to show progress in its personal computer business, which was indeed a bright spot in the quarter.

Over the last couple years, amid an increasing shift to tablets and souped-up smartphones, PC makers have experienced a sharp drop off in sales. But PCs sales are starting to pick up and PC makers are sounding more upbeat.

While tablets have indeed won places in homes, they aren't replacing computers in the workplace due to their limited capabilities.

"Companies are realizing there's a need for a productivity tool that's different than just a tablet," Whitman said last quarter.

Also helping the limping segment is that businesses are starting to replace antiquated computers and software in large part because of Microsoft Corp's (Nasdaq: MSFT) decision to phase out support for its outdated Windows XP operating system.

This time around, the company said profitability in the segment is strong, and it remains committed to bringing growth back to the sector.

"Overall, I'm very pleased with the progress we've made," Whitman said in a statement. "When I look at the way the business is performing, the pipeline of innovation and the daily feedback that I receive from our customers and partners, my confidence in the turnaround grows stronger."

Whitman has impressed Wall Street with her ambitious turnaround efforts.

HP provided an optimistic outlook for the reminder of the year. The company projects full-year earnings per share of a robust $3.74.

With good things ahead for Hewlett-Packard, there is one major reason to expect the HPQ stock price to rise - take a look...

The Secret Weapon That Will Push the HPQ Stock Price Higher