Despite billions in bond-buying "quantitative easing" and near-zero interest rates courtesy of the U.S. Federal Reserve policy, Americans stashed $1.8 trillion in low-yield accounts since the QE program started in 2008. 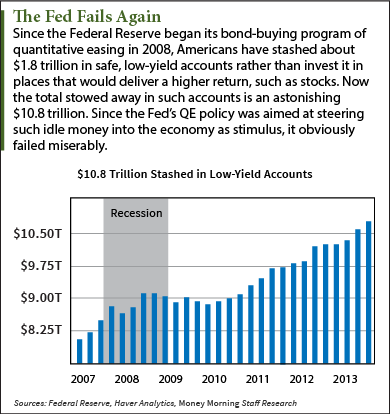 The flight from risk resulting from this poor Fed policy has raised the total stashed away in such accounts to an absurd $10.8 trillion.

It's yet another piece of evidence that the Fed's ill-conceived maneuvers to fix the economy have utterly failed.

Stowing money away in "safe" accounts is the exact opposite of what the Fed's "easy money" policies were supposed to do. The goal was to prod Americans to spend and invest more money to stimulate the struggling U.S. economy.

Not that you'll be hearing an apology from the Fed governors any time soon. As the U.S. central bank winds down QE, it speaks of it less and less, perhaps hoping it will be forgotten.

At this past weekend's conference at Jackson Hole, Wyo., Fed Chairwoman Janet Yellen instead agonized over whether unemployment had fallen enough for the central bank to start thinking about raising interest rates.

In fact, no one at the Federal Reserve is talking about this embarrassing failure of Fed policy.

The number we're talking about is buried in the Fed's own quarterly "Financial Accounts of the United States" report.

Americans Had No Faith in the Fed's QE

Back in 2008, at the height of the financial crisis, Americans had about $9 trillion in low-yielding accounts.

Over the next several years, the Fed invested some $2.3 trillion in QE1, QE2, and QE3 in a furious attempt to stimulate spending and investment. Most of that money ended up in the reserve accounts of the Big Banks, while Americans burned by two stock market crashes in less than a decade refused to take the bait, instead squirreling away $1.8 trillion.

"We are still afraid, so we prefer to put a large part of our savings in assets that are guaranteed, like FDIC-insured bank accounts, or into money-market funds whose sponsor guarantees the return of the principal," Marketwatch columnist Rex Nutting wrote in a recent article on the subject.

So much for stimulus.

At the end of 2014's first quarter, 84.5% of annual disposable personal income was sitting in low-yield accounts, the highest proportion in 23 years.

What's more, all that QE hasn't been able to even hold things even.