The Marcellus Shale region has been a top U.S. natural gas producer for 10 years, and it's still delivering some of the best options for investing in natural gas stocks.

The Marcellus Shale Formation is the largest producing natural gas basin in the United States, delivering nearly 40% of the country's natural gas production. It spans a large part of the Eastern United States, including New York, Pennsylvania, and West Virginia. 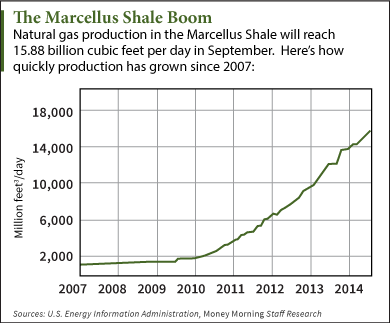 What's truly astounding about the Marcellus Shale is how much its production has grown. In 2010, the Marcellus was producing 2 billion cubic feet per day (bcfd) of natural gas. In August, it produced 15.63 bcfd. In September, production is expected to reach 15.88 bcfd.

Instead, it's drilling technique improvement that has boosted production.

Moors first alerted readers to the Marcellus' massive potential back in 2009, when production was under 2 billion bcfd. Since then, production from the region has increased nearly eight-fold.

According to Moors, companies have used the experience from drilling in the region over the past 10 years to improve their operations and increase output.

The growth is expected to continue through 2014, as the EIA expects each rig in the region to support 6 million cubic feet of new production per day. With 100 rigs currently operational, that's an increase of 600 million cubic feet per day from the Marcellus Shale.

And the growth has translated to profits for investors...

If you've missed profiting from this region's growth, it's not too late. Marcellus stocks still have room to run.

Here are three of the best natural gas stocks to buy to start profiting from the Marcellus now.