Several years ago I made the comment that I thought Apple Inc. (Nasdaq: AAPL) may be the world's first $1-trillion company. Now, I think Alibaba Group Holding Ltd. (NYSE: BABA) is the better bet.

Sacrilege?  Not if you think about the big picture.

Today I want to talk about why Apple investors should switch horses and what the Alibaba IPO means for your money. Then, we'll dive into two profit plays you can make right now that could help you capture some truly outrageous profit potential in the months ahead.

Let's get the tough stuff out of the way first. 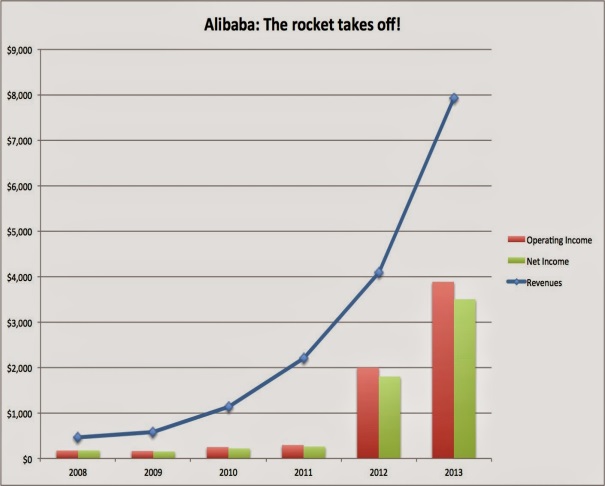 The decision to back Alibaba over Apple really comes down to numbers. It's not all that difficult to see why. What's difficult is that millions of Apple fans simply can't take off their rose-colored "iGlasses" to do so objectively.

Clearly, though, the bottom line is important, so you can't talk about top-line growth without looking at what comes home at the end of the day.

Here, too, Apple is in serious trouble. A once-proud brand with seemingly bulletproof margins, the fact that its profit has rolled over for the first time in a decade is a serious development that calls to mind the likes of Blackberry, Sony, and Nokia - all of which are struggling to remain relevant in markets they created. 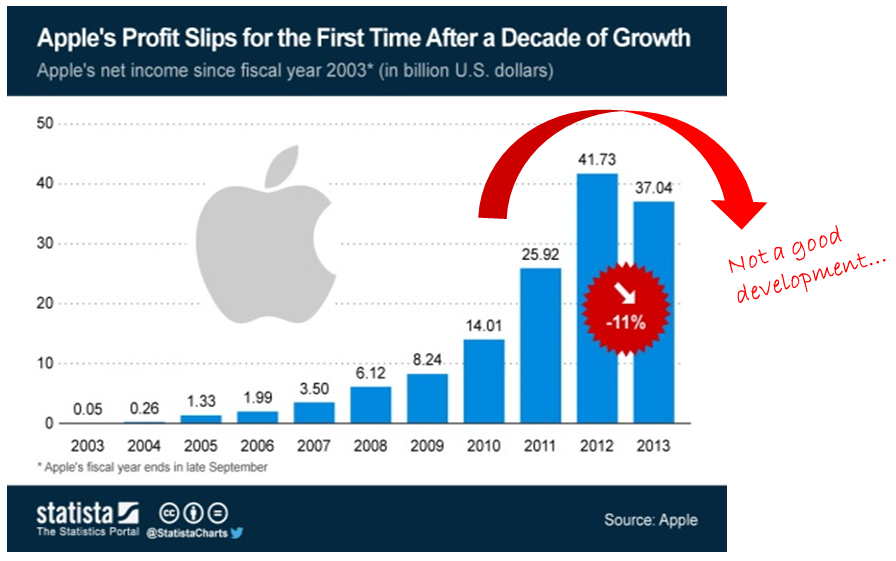 Interestingly, I was challenged on exactly this point earlier this week by my good friend Charles Payne on FOX Business, who noted that the iPhone is a screaming success. I agree. It is.

But what I couldn't say because the broadcast timing didn't allow for it, was that the iPhone reportedly costs Apple $350.60 a unit to produce and results in a gross profit of $248.40 or 41.5% per unit, according to Quartz and various other financial reporting institutions.  That's nowhere near the 60% to 70% achieved with earlier models.

Apple's operating margin in 2013 was 28.7% versus Alibaba's margin of 51%, according to USA Today. So here, too, the numbers are going in the wrong direction.

Still, the Apple-istas don't give up easily and I don't blame them. Apple is a tremendous brand. Yet, there were seven Android phones sold in 2014 for every one iPhone sold. Apple's smartphone market share is only 11.7% in 2014, and it's poised to drop further even as Google and Samsung charge ahead. 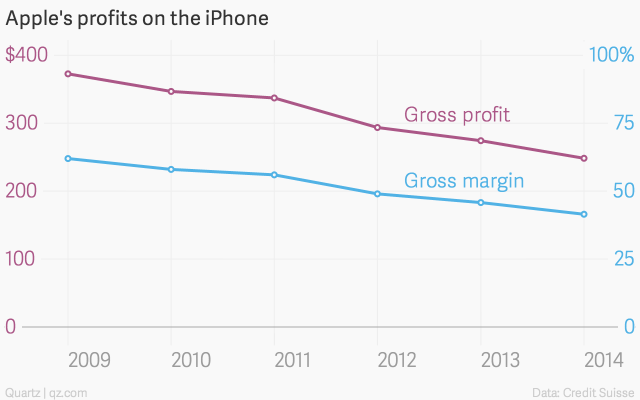 Even more telling is that Apple's latest and greatest, the iPhone 6, is just catching up to the Nexus 4 released on November 20, 2012.

So you expect this to be a monster growth stock up 500% in the next few years?