When BABA stock opened at $92.70, early shareholders had an immediate return of 36.3% from the offer price. 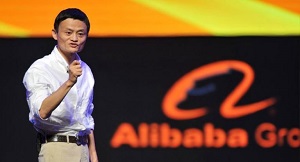 Institutional investors were the biggest winners from today's historic IPO. According to The Wall Street Journal, nearly 50% of all Alibaba shares were offered to just 25 accounts. The top 40 accounts got almost 80% of BABA shares.

Alibaba finished its first day of trading with a valuation of $231 billion. That means the Chinese e-commerce company is already bigger than Facebook Inc. (Nasdaq: FB) which is valued at $200 billion. Competitors Amazon.com Inc. (Nasdaq: AMZN) and eBay Inc. (Nasdaq: EBAY) have market caps of just $153 billion and $65 billion, respectively.

"We want to be bigger than Wal-Mart," Alibaba Founder Jack Ma told CNBC this morning. "We hope in 15 years people say this is a company like Microsoft, IBM, Wal-Mart; they changed, shaped the world."

At the offer price, the Alibaba IPO raised $21.8 billion. That price could climb much higher - possibly to $25 billion - depending on how many shares the deal's underwriters purchase following the IPO.

"Alibaba is a historic stock deal," Money Morning's Executive Editor Bill Patalon said. "Profit opportunities like this come along once, maybe twice, in an investor's lifetime."

Jack Ma and other company officials rang the opening bell at the New York Stock Exchange this morning. In early trading, Ma's stake in Alibaba was worth more than $19 billion.

Ma also spoke live on CNBC before BABA stock hit the market, and told investors who are worried about Alibaba's corporate structure to "Trust us. Trust the market. Trust the young people. Trust the technology."

Alibaba has an unorthodox corporate structure that does not provide shareholder much voting rights. The decision-making will remain squarely in the hands of Alibaba's board, which was a turn off to some Wall Street pundits. However, tech giants like Facebook and Google Inc. (Nasdaq: GOOG) also offer investors little say in company decisions.

For early investors, the initial return from BABA stock has been a resounding success. But that could just be the start for the Alibaba stock price...