Amid yet another dreary earnings report, Oracle Corp. (NYSE: ORCL) announced that iconic founder and CEO Larry Ellison would surrender his chief executive title after 37 years.

But for ORCL investors, Ellison's title change, or even another weak earnings report, wasn't the biggest concern.

No, the biggest concern is the ill-advised decision to appoint both co-presidents Safra Catz and Mark Hurd to the CEO position, creating a two-headed beast that will only make it harder for Redwood City, Calif.-based Oracle to calibrate its cloud computing strategy to be more competitive.

"It's a bad mistake," UBS analyst Brent Thill told Bloomberg. "If you have two people in the room, one is going to dominate. It's best to have an organization run by one, because there's less confusion. I don't think it's a good business strategy."

But the reality could be worse. Larry Ellison will still be very much involved in the decision making at Oracle. Not only did the Oracle board elect him as executive chairman, but he's also taking the title of "Chief Technology Officer," much as Bill Gates became "Chief Software Architect" at Microsoft Corp. (Nasdaq: MSFT) when he handed over the CEO title to Steve Ballmer.

This kind of muddled leadership structure is a recipe for trouble, and in his statement Ellison sounded like he was trying to head off the inevitable criticism. 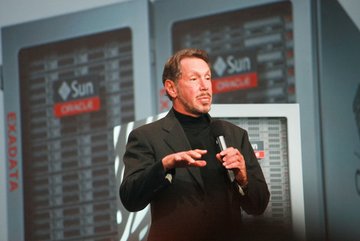 Ellison noted that the three of them had been "working well together for the last several years" and that the only difference would be that Hurd and Catz will report directly to the board rather than to him.

But conferring the title of CEO on two people has rarely worked well. Just look at the BlackBerry Ltd. (Nasdaq: BBRY) CEO duo of Jim Balsillie and Mike Lazaridis. Or last year when SAP had to move co-CEO Jim Hagemann Snabe to the company's board so Bill McDermott could remain as sole CEO.

"It's inherently unstable, you create a two-headed monster," Jeffrey Sonnenfeld, a business professor at Yale University, told Bloomberg. "There's lack of clarity. When they've tried it at many places it's been inelegant."

The business software and hardware provider reported earnings of $0.62 a share, missing Wall Street expectations of $0.64, the company's sixth miss in the past eight quarters.

And growth has turned sluggish; sales haven't risen by more than 4% in a quarter since mid-2011.

That's kept ORCL stock in so-so territory, more or less matching the performance of the Standard & Poor's 500 index over the past five years.

All of which begs the question: Why did Larry Ellison pick now to change Oracle's leadership structure, and why two CEOs?