I say estimated because nobody actually knows for sure, as the derivatives markets remain almost entirely unregulated.

And, that's why the well-intentioned but completely misguided onesey-twosey's bailouts and Band-Aids we've seen so far won't cut it despite the fact that they're already into the trillions of dollars.

But don't abandon the ship yet. We can get through and take our profits at the appropriate time; all it takes is a little moxie and a steady game plan like this one…

How We Got Here Is a Story in Itself

The total value of the United States' economy is approximately $16.9 trillion. The world's GDP is around $73.8 trillion, while the total capitalization of world stock and bond markets is approximately $212 trillion depending on various sources.

You can see the problem represented at left as easily as I can… there literally isn't enough money on the planet to bail us out, and I don't care who's got the keys to the printing presses. 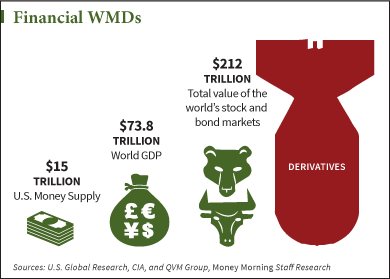 What we've been handed is an overlapping bubble that's gotten progressively larger over time as our legislators, bankers and regulators have progressively "improved" the system.

Following World War II, we levered up approximately 10 to 1 as the United States, Europe, and Japan recovered. Then, in the 1970s, the United States moved away from the gold standard. Other nations followed, taking global leverage higher; 30 to 1 became the new standard.

Following the Asian currency crisis and the beginning of Japan's Lost Decade, things jumped to 60 to 1 as ChinIndia, the Dot.bomb boom, and housing took off.

In 1999 Congress tore down Glass-Steagall with the Gramm-Leach-Bliley Act, and in the process removed many of the limits between commercial banking and securities firm affiliations.

Shortly thereafter, it passed the Commodity Futures Modernization Act in 2000 which specifically exempted credit default swaps and other exotic derivatives from reporting. That created a Wild West-like atmosphere for traders and their firms using leverage that jumped as high as 100 to 1.

The bubble simply grew and grew… and grew.

And it's not just in one market either… but in every market. I believe this is precisely what our leaders and bankers are missing. To them, the crisis appears like a bunch of independent bubbles each with its own unique set of causal factors and solutions.

Take your pick: the housing bubble, the credit bubble, the EU, China – you name it, only they're not so independent.

The Problem with the "Smartest Guys in the Room"

So why do guys like Ben Bernanke, Paul Krugman, Janet Yellen, our Congress, the ECB, the Bank of Japan, and China's Central Bank like the idea of printing their way out of this mess?

I've commented extensively since this crisis began about what they should be doing, so I'm not going to delve into those details again but here's a quick summary:

You may have your own opinions or even disagree with mine. That's okay and expected. There are no easy solutions this time, nor is there a singular perspective.

But there is a way to profit amid the turmoil…