It's a combination of the dollar's tenuous strength and elevated downside speculation that explains why silver prices are down right now. 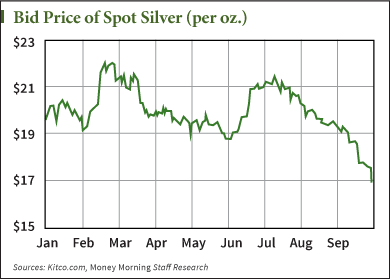 Silver futures – contracts promising the future delivery of physical silver – dropped 12.5% on the month, falling to $17.06 as of yesterday's close. That's a decline of $2.43.

Exchange-traded funds backed by silver were also clobbered in September. Silver ETFs, such as the iShares Silver Trust (NYSE Arca: SLV) closed yesterday at $16.35, a 12.6% descent on the month, and the ETFS Physical Silver Shares (NYSE Arca: SIVR) fell to $16.78, also down 12.6%.

This slump, however, can be explained by a number of easily identifiable factors that are not sustainable in the long-term, and once they clear up, silver will be able to reverse this fall.

Just look at the strength of the dollar. It's at four-year highs just as silver prices are at their four-year lows.

And if the dollar's strength is indeed at its peak, and there are a number of indicators to suggest that, then we can expect similar movements for silver going toward the end of 2014.

And futures activity suggests that silver's bears are prepping for a squeeze.

Here's why the dollar's unwarranted strength, and the high volume of silver short-side speculators, is coming to an end.