Most investors haven't got a clue about what Hong Kong's riots represent, let alone the investment potential that's being unleashed there. As a result, they're going to miss out on some really terrific profit opportunities.

Hong Kong is like an onion. Returned from a century of British rule to Beijing on June 30, 1997, there are layers and layers of subtleties. For most westerners, the place is a complete enigma.

For me, though, it's an economic playground. I've been very fortunate to have spent almost my entire career in global markets including a lot of time on the ground in Asia, so I am intimately familiar with both the culture and the perspective that can't be obtained by watching only Western news feeds.

It's this background that provides the ability to peer through the government and market filters, and find what I believe are solid niches for profit, even in the midst... and dangers... of the turmoil.

Indeed, understanding what's driving the unrest is our key...

Beijing's Response Is Muted... For Now

Contrary to what many in Hong Kong's elite circles like to believe, the world does not revolve around them. Beijing is the true power base.

So far, Beijing has demonstrated remarkable and unprecedented restraint in dealing with the protestors. What's happening in Hong Kong wouldn't be tolerated in mainland China for a nanosecond. Beijing will not hesitate to roll in the troops if it believes the Communist Party is threatened, even if it means they have to squash the "Capitalist" party now taking to the streets.

That said, the Central Committee is acutely aware of the stakes.

"Hong Kongers," in their arrogance, don't understand this. A century of British rule has led many to mistakenly believe that they are economically, politically, and morally superior to the mainland's "bumpkins." It's a serious lapse in judgment that has become a part of the cultural fabric over time.

The irony is that Beijing decided years ago - long before the handover - that Shanghai's financial markets are China's future. So they have largely left Hong Kong alone because it is a useful source of foreign capital and currency. Doing so conveys "face," a uniquely Asian concept incorporating the combination of influence, honor, social standing, and reputation. 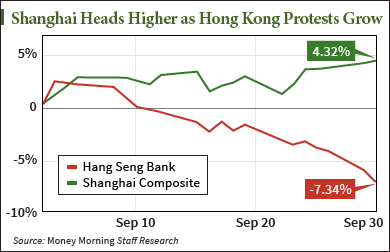 You can see that very clearly in the indices of both, which have diverged considerably over the past month as the protests have gathered steam. The Hong Kong-based Hang Seng Bank has lost 7.34% while the Shanghai Composite has gained 4.32% over the same time period.

If anything, further rabble-rousing in Hong Kong only solidifies Beijing's decisions. Further, the money being lost in Hong Kong's markets is irrelevant to Beijing's way of thinking with each new demonstrator taking to the streets

Remember, we are talking about a divide between the Communist Party and the "Capitalist" party... NOT the democracy the Hong Kongers are protesting and NOT the financial markets that western analysts believe.

To that end, if this really goes to the mat - and I think it will - there are going to be a number of things happening. And that brings me to your money...