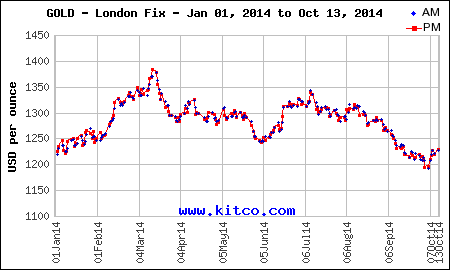 Recent History: On Oct. 3, gold prices fell below the $1,200-an-ounce threshold on the London p.m. fix. The yellow metal slipped 5.9% in the month of September. Stronger-than-expected economic data and a higher U.S. dollar took their toll on gold that month.

But gold futures for December delivery shot up to trade near a four-week high. They gained 0.2% to $1,232.70 an ounce on the Comex in New York. Earlier this morning, they touched $1,238.60 an ounce - the highest since mid-September. Gold ETFs are seeing their first inflows in over a month.

Money Morning's bottom line: No matter where gold prices are headed in coming months, owning gold is an important part of a healthy portfolio. Check out our chief investment strategest's two-part "cheat sheet" that will help you figure out exactly how much you should own, to the dollar, here...