The gold/silver ratio is more than a price comparison of two precious metals.

This calculation helps identify the relative values of these metals to each other. It tells you if gold and silver are cheap or expensive.

And it just might help you get a better deal…

It's an important tool to use when buying gold or silver – or both. As markets continue their losing streak and precious metals investors look to load up, here's how the gold/silver ratio can help.

The gold/silver ratio shows how many ounces of silver are needed to buy one ounce of gold.

Looking back in history to 1687 (the oldest records we have), this ratio has swayed between 14 and 100, but was stable at around 16 for centuries. According to the U.S. Geological Survey, silver is about 17.6 times more abundant in the earth's crust than gold, which provides some rationale for the long-term average of about 16.

Of course, the ratio fluctuates over time. But it's a great gauge that gives you the relative value of one metal versus the other.

The long-term gold/silver ratio chart shown below gives some perspective. 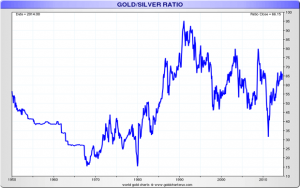 The ratio's average during the last precious metals bull market was about 30, meaning it took 30 silver ounces to buy one gold ounce.

By the end of that secular bull market, silver spiked to $50 at a point when gold traded for $750, producing a ratio low of 15.

How to Use the Gold/Silver Ratio Today

The first thing to note is that since 2000, the gold/silver ratio has mostly traded in a range between 45 and 80, but has averaged about 55, which is considerably higher than it was during the last bull market.

When the financial crisis hit in late 2008, gold dropped to $720, but silver fell harder to $9. This caused the gold/silver ratio to spike to 80. Gold clearly acted as the safe haven in that time of duress.

But as the current bull continues to mature, I think the ratio is going to work its way much lower than current levels.

And that spells serious opportunity for future silver prices.

I'll be saying much more about the gold/silver ratio and my forecast for silver prices next week – so stay tuned.

Editor's Note: Gold and silver typically grab all the attention, but there's another metal that could blast past both of these, virtually overnight. It has unique physical properties for which there is just no substitute. It's 15 times more rare than platinum, and 30 times more rare than gold. Here's why it's time to buy the precious metal that's primed to double…