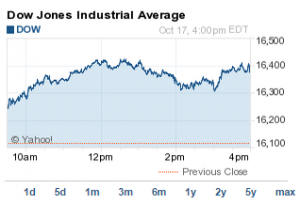 The Dow Jones today rebounded strongly after a rough week, adding 263.10 points. The Nasdaq and S&P 500 also saw gains on the day, buoyed by strong performances in the tech sector. The S&P 500 Volatility Index (VIX) dipped almost 12% on the day.

What moved the Dow: The Dow rebounded on stronger than expected housing figures. In addition, rising consumer sentiment hit a seven-year high in the face of concerns about an Ebola outbreak. U.S. housing starts increased by 6.3% in September, surpassing expectations of 4.6% growth. However, building permits, which are a signal of future construction, gained a mere 1.5% in September, falling short of expectations of a 2.3% increase. The Thomson Reuters/University of Michigan preliminary sentiment index for October hit 86.4, its highest level since July 2007. Consensus expectations called for a reading of 84.

Most notable economic news: In addition to positive news about rising housing starts, shares of U.S. homebuilders also rose on news that mortgage giants Fannie Mae and Freddie Mac are closing in on a deal that might boost mortgage lending across the country. Shares of Toll Brothers Inc. (NYSE: TOL) gained nearly 3%. Shares of D.R. Horton Inc. (NYSE: DHI) rose 6%. And, shares of KB Home (NYSE: KBH) were up almost 7% on the day.

Now for three of today's best profit opportunities from our investing experts – for Money Morning Membersonly (Not a Member? Sign up now – it's free):