"Mr. Market" is the analogy Warren Buffett uses to help investors understand the market as though it were a person.

Usually, Mr. Market is as rational as the efficient market we all dream about.

In the space of just a few weeks, Mr. Market has gone from being downright giddy to sliding into a deep funk. 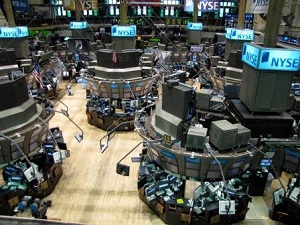 So, today I am going to lay out for you an anatomy of Mr. Market's mood swings. That way you'll understand what we are up against as investors and why I continue to say don't cash out now…

Here's What Technical Analysis of the Stock Market Sell-Off Shows

To understand what's really happening with U.S. stocks, we need to perform some technical analysis. Think of this as the flip side of fundamentals – we're examining charts, not financial statements.

We began a conversation about charting on Sept. 29. At the time, I introduced you to the concept of using simple moving averages to determine how much investor support a stock really has.

We can use these same tools to drill down and find out what's happening in the market as a whole. We literally can see if we are in an uptrend or a downtrend, near a top or at a bottom.

In other words, technical analysis and charting can improve your timing so that you know when to put in less money and when to make bigger plays. And that's what we are going to do now by charting key days in the recent market sell-off.

Today, I'm going to use the bellwether Standard & Poor's 500 Index to depict the broad market. To see where we are in terms of investor support, we're going to plot the 200-day moving average, which most pros consider the market's crucial support level.

One more technical point: I'm going to be talking about candlestick patterns. These visual symbols really let you see what's happening on any given day.

And they're color-coded – green for winning days, red for losing ones. So, let's get started with our "Anatomy of a Sell-Off" by looking at key dates: