There is a way out for them. That same way out could also rein in college costs.

But it's blocked by law. Obviously, the law has to be changed.

It can be done in just one step.

And today, I'll tell you how we can get there…

The wrongheaded law, which the financial industry pushed hard for, of course, is the Bankruptcy Abuse Prevention and Consumer Protection Act of 2005 (BAPCPA). 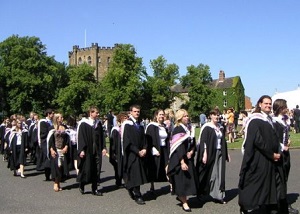 BAPCPA basically says the courts cannot wipe out any student loan debt – federal or private – in bankruptcy unless the borrower can prove repaying the loan would cause "undue hardship."

And you can pretty much forget demonstrating undue hardship unless you suffer from a severe disability.

BAPCPA lumps student loan debt in with child support and criminal fines as types of debt that can't be discharged in bankruptcy.

While the "Bankruptcy Abuse Prevention" part of the law is obvious, one wonders where the "Consumer Protection" part of BAPCPA resides.

It's in there, but to find it, you have to understand how bull-you-know-what is spun into colorful yarn and woven into legislation.

In 2010, student loan debt in the United States surpassed credit card debt for the first time. And thanks to BAPCPA – let's call it the "Racket Protection Act" – lenders are sticking it to students for life.

Private lenders, however, say they're only a small part of that big number and are wrongly being pummeled. That's not exactly true.

It is true that only about 10% of the $1.3 trillion of student loan debt is strictly private. But according to the U.S. Department of Education, about 33%, or $403 billion, of the total is private debt backed by government guarantees.

It doesn't matter what form student loan debt takes – BAPCPA says it cannot be wiped out during bankruptcy.

BAPCPA is clearly a problem. Now, here's the solution…

It is time for our country and government to take a new,better, much more adaptable approach to …education, healthcare, and infrastructure…. These are the bedrock on which the best of our understandings in …ecology, economics and engineering…. flourish with the otherwise potentially runaway, dissociative 'Global Financial Enterprise'.

I personaly thank God and this nation for being such a Great Country to be part of a wounderful Government gives me and my children Such a unique especial apreciation for being here thank you so much for ur kindness and looking all of us Americans God Bless you all and your families too Truely Yours Christian Orlando Ramírez.