On the heels of the worst market volatility in nearly 20 years, and more "crash talk" than we've heard maybe ever, it's starting to look like a smart time to hit the eject button and get out of the markets altogether.

In fact, that's probably the most common question I'm hearing these days: "Should I be in the stock market right now?"

Believe me, I get it. Folks are emotionally shattered from seeing their wealth cut in half twice – once in 2000 and again in 2007-2008. That's why 55% of Americans have no money in the stock market at all, according to a Federal Reserve Board analysis from last year. I think the number is actually higher, because of the anecdotal evidence I gather on a daily basis.

That means hundreds of millions of people are missing this blindingly simple tactic that drives my strategy for my new Total Wealth publication.

If only those people would look at this chart of the Dow Jones over the last 114 years: 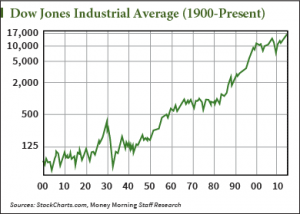 Despite two world wars, multiple invasions, presidential assassinations, the Cold War, hot wars, recession, depression, and all manner of events that no doubt seemed "catastrophic" at the time, it continued to push higher.

Why did it keep going up? Because the companies that comprise the Dow continued to make products, provide services, and grow earnings. It's that simple.

There are more people on this planet every single year. There's more money being created. There's more velocity. Capital is a creative force, too. As more wealth is created, investors joining the party are willing to pay increasingly higher prices to go along for the ride. It really isn't more sophisticated than that.

That's why "always own stocks" is another Total Wealth tactic.

Many people don't think of this as an investing tactic. But truth be told, it may actually be the most important tactic of all, because if you don't own stocks, then you can't participate in what I think of as "the upside of humanity."

The big problem for many investors today is they are struggling with both retail inflation and stagnant real wages ( Stagflation). People don't save enough. There is also a growing lack of confidence in the U.S. Government, its Politicians and leadership, the FED, and the Stock Market (many perceive it as rigged against them).

Negative sentiment drives markets or holds them back, even more than quarterly earnings or "fundamentals" Who can blame investors from having negative sentiment under these circumstances and conditions? Not me.

I agree, that chart does say it all. Unless we abandon capitalism, the stock market will continue to be a viable investment. People just have to ignore their emotions and use logic. Sometimes the market will fall, but in the long run it will prevail.

Now if only i could take my own advice.

good afternon ladies and gentleman.hope that you understand our setuation our prosperity that is your prosperity.how can i sustain my investment. if the currency is always war.for all concerned hope that understand not just for my own but for all,its time for the dollars.