It's officially silly season in U.S. politics leading up to midterm elections, with both parties stooping to distraction and hyperbole. As usual, some of the most misguided utterances so far have come from the White House and, specifically, from our own Commander-in-Chief.

Speaking to students and faculty at Northwestern University on October 2, 2014, U.S. President Barack Obama said of America's economic recovery, "It is a direct result of the American people's drive and determination… and the decisions made by my administration."

I totally agree with the first part of that statement. But the second part of it – the assertion that credit for whatever recovery we've had lies with his administration – is charitable, to put it mildly.

Love him or hate him, nearly 45% of the recovery can be traced to this one, single economic sector, and the president is actually dead set against it.

If you're like me, your eyebrows just shot up. Mine sure did when I first took a hard look at the data and ran the numbers.

That's because I love the underdog. Anytime something is unloved and unnoticed, I'm interested, especially if the numbers line up. And, boy, do they ever in this case.

At a time when overall U.S. employment has yet to return to its pre-recession levels of 2008, oil and gas exploration is the only sector that employs 40% more people now than it did then.

In fact, the growth is so strong that if you strip everything else away from the recovery President Obama insists he's created, there wouldn't be one for more than 139 million Americans as of September. 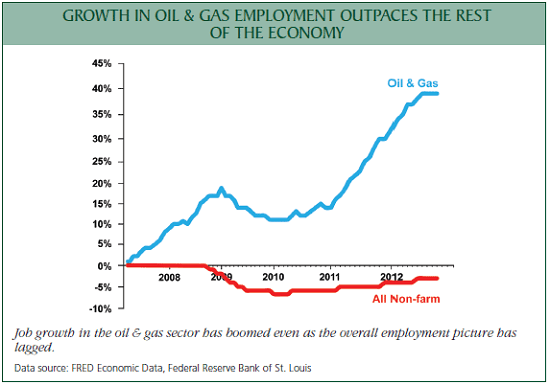 Even better – at least when it comes to investing potential – the president positively hates this sector, preferring instead to invest in so-called "green" alternatives, many of which haven't paid off. Solyndra, anybody?

And this begs the question: What would this historically weak "recovery" have looked like without the massive energy boom?

The ten top energy-producing states in America provide a clue.