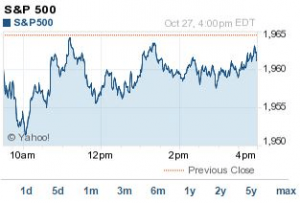 U.S. stock markets failed to move much Monday. It appears investors aren't prepared to take much action until the start of the Federal Open Market Committee meeting on Tuesday and the central bank's announcement on Wednesday regarding rate hikes and stimulus efforts. The Dow Jones managed to tack on 12.27 points, while the S&P 500 lost 2.95 points.

What moved the markets: The markets moved down on declining energy prices, as oil stocks slipped after Goldman Sachs Group Inc. (NYSE: GS) slashed its 2015 Brent and West Texas Intermediate (WTI) crude forecasts on rising supply concerns. After the announcement, WTI prices dipped below the $80 mark for a short period, before rebounding to nearly $81 per barrel. Brent crude oil prices took the strongest hit, slipping 0.8% to less than $85.50 per barrel. On the day, the S&P 500 energy index (INDEXSP: SP500-10) dipped 2.2%.

Most notable economic news: A slew of mixed economic news hit the markets this afternoon. First, contracts to purchase existing homes in September were up 0.3%. Next, manufacturing output in Texas slipped but remained positive for October. Finally, activity in the U.S. services sector slipped to a six-month index low of 57.3, coming in lower than consensus expectations of 58.