After the recent market slip – down 6.8% in less than one month – the big question this week is will the Fed extend QE3?

The U.S. Federal Reserve hasn't been able to keep its mouth shut during these volatile times. Just look at how the Fed responded to the last month of market activity…

On Sept. 24, the Dow Jones Industrial Average headed to an all-time high. The index sat at 17,210.06, just below the record close the week before. Repeated record highs have been common in this Fed-induced, five-year bull market.

Then the next day, the Dow dropped 264 points. But the Fed wasn't ready to let traders get the better of it.

Fed monetary policy dove and Federal Reserve Bank of Chicago President Charles Evans led the charge. He tried to prop up the markets with talk that the Fed would not hurry to raise interest rates, against the words of some of his more hawkish colleagues.

"I am very uncomfortable with calls to raise our policy rate sooner than later," Evans said on Sept. 29 in a speech at the National Association for Business Economics, The Wall Street Journal reported. "I favor delaying liftoff until I am more certain that we have sufficient momentum in place toward our policy goals." 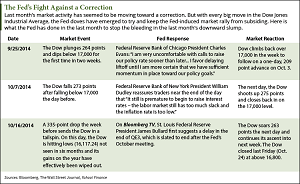 It may not have reignited the Dow to a new high, but it did allow it to steady for a couple of days. It ended the week just above 17,000.

The next week, however, brought a 273-point drop in the Dow. And the Fed doves used the opportunity once again to talk interest rates.

This time it was New York's Federal Reserve President William Dudley who looked to reassert to the markets that interest rates would not take off until mid-2015.

"It still is premature to begin to raise interest rates – the labor market still has too much slack and the inflation rate is too low," Dudley said, as reported by the Journal on Oct.7.

His remarks helped support a quick sprint back to 17,000.

That Fed-driven market optimism lasted only a day. On Oct. 9, the drop that ignited what was almost a full-on correction happened: a 335-point freefall in the Dow.

And the Fed, once again, couldn't stay quiet.

The Fed Sparks Talks of an Extended QE3

This is when talks of extending QE3 began.

"Inflation expectations are declining in the U.S.," St. Louis Fed President James Bullard said in an interview with Bloomberg News on Oct. 16. "That's an important consideration for a central bank. And for that reason I think that a logical policy response at this juncture may be to delay the end of the QE."

So is Bullard on-point? Will the Fed delay the end of the taper expected in October?