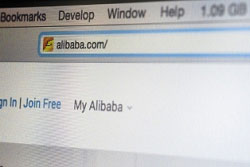 Ma said both sides would have to be interested in the "marriage." Later in the day, Apple's Chief Executive Tim Cook said he'll be meeting with Ma at the end of the week.

For Apple, the partnership will help the company through some of Apple Pay's early speed bumps. Big-name retailers like Wal-Mart Stores Inc. (NYSE: WMT) and Rite Aid Corp. (NYSE: RAD) have rejected the service due to the lack of customer data they can pull from customers compared to credit cards.

Alibaba is well positioned in the mobile payments market. Its site Alipay is similar to PayPal, and has more than 300 million active users.

For Alibaba, the partnership would bring the company further into the U.S. market. According to Cook, the iPhone payment service had 1 million sign-ups in its first 72 hours. He also said more credit cards are associated with Apple Pay than with all other similar "tap-to-pay" services combined.

And the U.S. mobile payments market is growing rapidly. With the help of Apple, $100 a share for BABA could be just the start...