Since the troughs of 2009, the main market benchmarks have grown more than 150%, while the Fed balance sheet has more than doubled.

She has already started. Over the next two days, the Fed's policy-setting Federal Open Market Committee (FOMC) will convene for the final FOMC meeting of the "easy money era." The Fed is expected to end the two-year, massive bond-buying program known as the third round of quantitative easing (QE3). 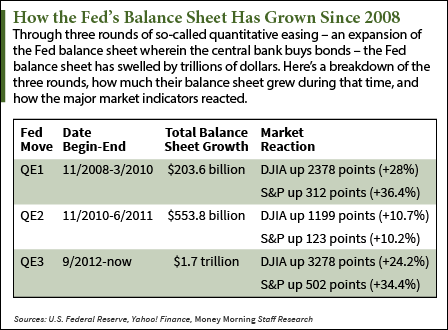 And the magic number is 4.5 trillion.

After almost seven years of asset purchases, the Fed balance sheet now has $4.5 trillion in assets. Yellen will have to release them back into the economy.

There are real concerns about how the Fed is going to do this without scaring the markets. How will the economy react after it's taken off life support?

Before we answer that, it's important to understand exactly how we got to $4.5 trillion….

The timeline begins in 2007 – the start of the financial crisis.

In August 2007, French bank BNP Paribas announced it couldn't properly value certain mortgage-backed securities. This was because of exotic financial engineering that masked the risk and quality of the borrower underlying the mortgages. Think subprime mortgage crisis.

This caused a stir in interbank lending as the year moved forward.

Banks were reluctant to lend to each other on anything other than overnight loans. They feared the BNP episode was a signal that banks were highly leveraged on shoddy investment instruments.

This panic prompted the Fed to launch a series of emergency lending programs. The central bank claimed authority to do so through the "unusual and exigent circumstances" clause in the Federal Reserve Act of 1913.

The Fed stepped in with the Term Auction Facility (TAF) in December 2007. It was an effort to offer interbank loans without forcing banks to borrow through the Fed's discount window. Borrowing through the Fed often carries the stigma of weak finances for any bank that does it, whether the institution is struggling or not.

From December 2007 to March 2010, the Fed held 58 auctions for 28-day – and later 84-day – term loans. Financial institutions would submit interest rate bids for a piece of tens of billions of dollars in Fed funds. Through TAF, the Fed loaned out more than $3.8 trillion, all of which was paid back.

Around that same time, the Fed also looked to address a dollar shortage in international markets. Foreign banks holding dollar-denominated investments needed dollars. Growing demand made them harder to obtain.

This was the start of the Fed's central bank liquidity swap lines in December 2007.

Central banks from around the world could exchange their currency for U.S. dollars and shore up dollar liquidity in their own countries. The program totaled $10.1 trillion and had involved 10 countries by its end in July 2010.

The bulk of swaps were with the European Central Bank, which comprised about $8 trillion. Swaps were also conducted with the United Kingdom, Switzerland, Japan, Denmark, Sweden, South Korea, Australia, Norway, and Mexico.

By March 2008, the financial system was unraveling.

As the financial meltdown unfolded, Bernanke took an interventionist role in the markets. He micromanaged bank balance sheets and oversaw creative lending programs to keep the nation's banks liquid.

The first unprecedented central bank action was a $12.9 billion bridge loan to keep investment bank Bear Stearns from declaring bankruptcy over a weekend in mid-March.

The second was a new lending program at the Fed known as the primary dealer credit facility that allowed other investment banks like Bear Stearns easier access to Fed loans.

The Federal Reserve Bank of New York created a limited liability company called Maiden Lane LLC, which soaked up $30 billion of Bear's troubled mortgage assets. Of that, $29 billion was funded from a Fed loan and a $1 billion loan from JPMorgan. This allowed JPMorgan to make the purchase.

The Fed pursued a similar resolution with the struggling American Insurance Group Inc. (NYSE: AIG). This began with an $85 billion line of credit in September.