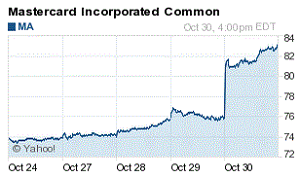 What Moved Markets Today: Credit card giants Visa Inc. (NYSE: V) and Mastercard Inc. (NYSE: MA) jumped 10% and 8.5% respectively on strong earnings reports, boosting the Dow Jones and S&P 500. Both companies said that mobile payments will be a strong component of future earnings and raised their outlooks on consumer transitions to the digital wallet. Mobile payments is going to be a very lucrative industry for investors. That's why we just put together a list of the companies winning this "mobile payments war" - take a look.

Today's Most Notable Economic News: The U.S. Commerce Department's first estimate of third-quarter GDP came in above market expectations. The nation's economy grew by 3.5% in the third quarter, well ahead of consensus expectations of 3.0%. This is still below the 4.6% growth reported in Q2, but provides strong momentum and confidence in the economy. The U.S. economy saw its strongest levels of military spending in five years.

Now check out the day's most important market notes (we filtered out the "noise"):