The arrival of Apple Pay means the mobile payments war will now seriously heat up.

The heft of Apple Inc. (Nasdaq: AAPL) and the fact that it was able to bring so many major players on board, from the big banks to the credit card companies, has put a spotlight on mobile payments.

Mobile payment transactions in the U.S. alone totaled $1.8 billion last year. They will more than double in 2014 to $4.5 billion, according to research firm BI Intelligence. They'll more than double again in 2015 to $15.4 billion. 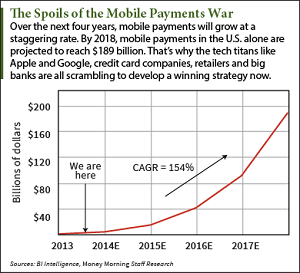 By 2018, BI Intelligence projects that U.S. consumers will make $189 billion in mobile payments.Numbers like that are attracting a lot of powerful companies to fight over the spoils. Big profits await the winners.

Earlier this week we told you about the losers in the mobile payments war. Today we're going to talk about the winners.

Apple Takes the Lead in the Mobile Payments War

Any discussion of the mobile payment war winners necessarily starts with Apple.

Despite Apple Pay's limited reach - it only works with the new iPhone 6 - the service is going into the hands of a very well-heeled demographic.

For example, a June comScore survey said the median income of a U.S. iPhone owner is $85,000. That's more than twice the median income for all U.S. full-time workers - $41,080, according to the U.S. Bureau of Labor Statistics.

It's what gave Apple the power to enlist the big banks like Bank of America Corp (NYSE: BAC) as well as Mastercard Inc. (NYSE: MA) and Visa Inc. (NYSE: V). 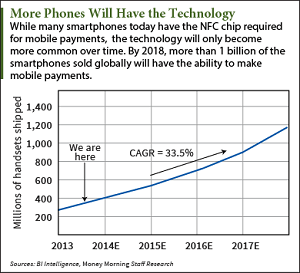 That high-profile demographic and Apple's focus on security give Apple Pay plenty of ammo to stay on the front lines of the mobile payments war. Apple will lose the market share battle, but that's okay. Apple has always been fine with skimming the best customers off the top.

And that brings us to how Apple makes money from mobile payments...

Apple Pay does bring in a little money itself in the form of a 0.15% fee the banks are paying in return for the added security.

But that's not where Apple will make money. Apple Pay is just one more tempting feature that adds value to the iPhone.

Just about everything Apple does these days is designed to make the iPhone a more compelling purchase. And rightly so - the iPhone rakes in more than half of the company's revenue and profits.

Apple Pay will sell more iPhones. It's that simple.

But despite its influence, Apple won't dominate mobile payments. Already some winners have begun to emerge.

Finding the Early Winners in the Mobile Payments War