There's only one problem, and that's how the addition of all this fake sweetener stuff will end.

Keep reading. Your heart is going to pound...

Bank of Japan Stimulus: Back from the Grave

The BOJ brought "Abenomics" back to life this morning when it announced it would ramp up efforts to treat, treat, and treat the economy to some more sugar-laced stimulus on steroids. (Abenomics is the tag hung on Prime Minister Shinzo Abe and his central bank's stimulus efforts.) 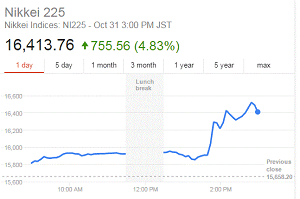 This was a three-way lick 'em and stick 'em bonanza:

And if that triple threat wasn't enough, Japan's gigantic public pension fund - the largest in the world - said it will start buying more global stocks and exchange-traded funds (ETFs) to jolt its returns.

Equity markets are soaring higher on the news. Central bank stimulus is sweet music to stocks.

If you want to make money on this news, you buy, buy, and buy stocks and more stocks.

Keep on dancing until the music stops.

Of course, there's just one little problem. Eventually, all that sweet stuff will give global markets a heart attack...

In the meantime, enjoy the treat. I'll tell you when the party's over and it's time to slim down on stocks and short everything.

More from Shah Gilani: The triple-digit moves we've been seeing so much of lately in the Dow Jones Industrial Average are telling. And they're not likely to go away any time soon. Here's why market volatility is the new normal...

Anyway to know when the music is stop