Wasteful government spending never goes out of style for Washington. And some of the worst examples are documented in the latest "Wastebook" from Sen. Tom Coburn, R-Okla.

This year's edition – Coburn's fifth and sadly his last as he plans to retire at the end of the current Congressional session – contains $25 billion of the most shocking examples of wasteful government spending. 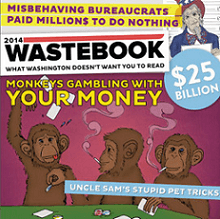 Coburn says that while the Wastebook accounts for less than 1% of the 2014 federal budget of $3.5 trillion, it makes a larger point.

"The thing is this is not a hard project," Coburn told the Chicago Tribune. "It's pretty easy to find this stuff. I could find you $250 billion, not $25 billion, worth of stupidity."

Meanwhile, the U.S. national debt continues to climb. It's now nearly $17.9 trillion, an increase of nearly $2 trillion just since 2012.

Check out just 13 egregious examples of misused taxpayer dollars from the 2014 Wastebook:

Can you handle more of this? Keep reading…