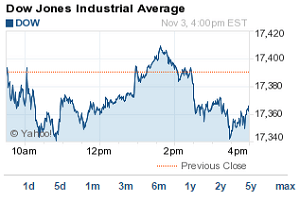 Dow Jones Today: U.S. stock markets were mixed on Monday, although the Dow Jones and S&P 500 hit intraday records during today's session. The market seems content to await the results of Tuesday's midterm elections and the upcoming October unemployment report on Friday. Energy stocks took the biggest hit as oil prices slumped yet again. The S&P 500 Volatility Index (VIX), the market's fear gage was up more than 5.5%.

What moved the markets: The markets gained some support from the recent announcement by the Bank of Japan to accelerate its own massive bond-purchasing program to stave off deflation. However, disappointing economic data from the Eurozone and China weighed on the markets this morning. The Eurozone's final October PMI reading registered at 50.6, missing consensus estimates of 50.7. Meanwhile, China reported weaker-than-expected numbers in its service sector, and it registered a five-month low in its October PMI level. Energy stocks also dragged down the Dow as oil prices slid again.

Most notable economic news: Updates on manufacturing and construction dominated the news. The Markit Manufacturing report offered a final October reading of 55.9, its lowest figures since August. Still, the October reading from the Institute for Supply Management index hit 59.0, a strong gain from September's 56.6 level. Meanwhile, U.S. construction spending in October fell by 0.4%, a rather heavy miss from the expected 0.7% level of growth.