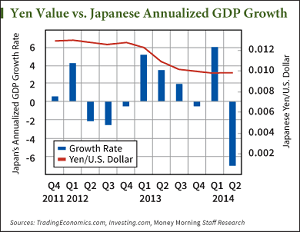 The accelerated Bank of Japan stimulus announced Friday took the media by surprise.

Fitz-Gerald told investors in March 2013 that Japan's new round of "easy  money" would fail to do anything different than the previous actions.

BOJ's announcement comes a little more than a year and a half after Japan first implemented so-called "Abenomics," named after Prime Minister Shinzo Abe.

Abenomics aimed to reverse Japan's deflation problems, stir up demand, and get the country back on a path to growth. Japan's 20-year battle with deflation has contributed to the country's debt-to-GDP ratio of close to 250% - the highest in the world.

The first two are already aggressive measures to try and spark inflation. That's why many were surprised at the announcement Friday by the BOJ to ramp up these efforts.

The first arrow, QE, looked to increase the monetary base by 60 trillion to 70 trillion yen per year ($526.6 billion to $614.4 billion). The program also included an annual purchase of long-term Japanese government bonds to the tune of 50 trillion yen ($438.9 billion) per year to put downward pressure on interest rates.

The second arrow addressed fiscal policy, and amounted to 10.3 trillion yen ($90.4 trillion), or 1.4% of Japanese GDP, in debt-financed stimulus spending.

The new plan would triple the pace of its asset purchases, extend maturities on bond purchases, and raise the ceiling of annual government bond-buying.

But here's why Fitz-Gerald wasn't surprised...

The Abenomics plan has been open-ended from the beginning. There was never an explicit timeline or price-tag. It was only initiated to address Japan's numerous economic woes.

Another clue that the BOJ would increase stimulus came from Abe's nominee for the head of the Bank of Japan in March 2013, Haruhiko Kuroda. The central bank leader pledged to pursue a "whatever it takes" mentality to fight deflation last year.

Japan's Struggling GDP: By the Numbers
Japan's annualized GDP growth rate seemed to be rebounding with Prime Minister Shinzo Abe's election at the end of 2012. In the first quarter of 2013, the annualized GDP growth rate was at 5.1%. But then it spiraled downward, shrinking by 0.1% in the fourth quarter.Then there was another surge in optimism at the start of this year. Growth grew 6%.But that number was vastly overstated.

The 6% growth came as demand picked up artificially. Japan announced a hike in the sales tax to come in the second quarter of the year, and that compelled Japanese consumers to up their demand ahead of the implementation of the tax.

The next quarter, with implementation, annualized GDP growth plunged 7.1%.

And "whatever it takes" is what Japan needs.

You see, there's a big reason Abenomics has not worked. Japan isn't dealing with a standard economic crisis that academics and economic theory can fix.

This isn't a financial crisis. It's a demographic one.

Japan: A Crisis of Fertility, Not Finance