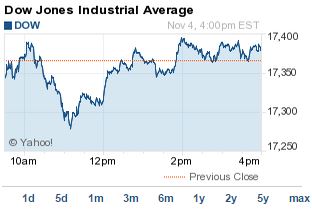 Dow Jones Today: U.S. stock markets were mixed Monday as investors await the results of today's midterm elections. The Nasdaq and S&P 500 ended the day in the red. The Dow Jones tacked on 17 points. With oil prices slumping more than 3% to multi-year lows Tuesday, energy stocks plunged again. The S&P 500 Volatility Index (VIX), the market's fear gauge, was up more than 1%.

What Moved Markets Today: Energy stocks weighed on the Dow Jones this afternoon, falling for the fourth consecutive trading session. The bigger story centers on mid-term elections in the United States and whether the Republican party will take hold of the Senate. However, there is growing uncertainty as to whether the balance in the Senate will be decided by midnight this evening, as a number of too-close-to-call races and runoffs are possible.

3900 Reads
The Best Penny Stocks to Own Right Now – 185% Profit Potential
The best penny stocks to own are the highest reward for the lowest risk. And there are preferably a lot of insiders buying up shares in good faith. Then I can trust the high analyst projections - like the 185% growth target on our top penny stock today.