Now the market will turn its focus to interest rates.

Will the Fed raise rates next year? If so, what effects will that have?

The Fed is ultimately reactive, exerting little, if any, control in the long run. Low rates are here only as long as the Fed can manage them.

At that point, it is time to look out.

Here's what will cause us nightmares, and what we can do to avert a crisis in our investments...

Americans Tighten Their Belts... While Their Government Races Toward Disaster

The International Center for Monetary and Banking Studies recently published its 16th annual Geneva Report. It's authored by a group of senior economists and former senior central bankers.

The report highlights a sustained increase in (especially) government debt in the developed world, as well as in China. Any deleveraging in the last few years has been minor, mostly limited to the private sector.

It goes on to caution the importance of low rates to stave off another crisis, while pointing out that, as the graph below shows, world debt has mushroomed from 160% of national income in 2001, to 200% in 2009, only to climb further to 215% last year. 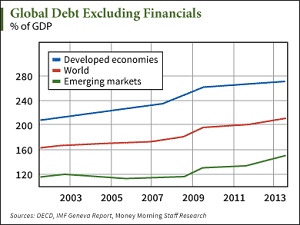 As a group, the report's authors expect interest rates worldwide to remain low for a "very, very long time," so that all borrowers (governments, companies, and individuals) will remain solvent and keep paying the interest on their debts.

So too does Ben Broadbent, deputy governor of the Bank of England, saying interest rates could remain "permanently" low.

All of this echoes what the Fed's been saying for years in order to reassure and stimulate the markets: there is no rush to raise rates.

None of this is really any surprise to us. But it's not quite that simple....

As we discussed recently, many expect the Fed to raise rates next year (more on this below), while Europe and Japan recently pushed their rates below zero to help fight off deflation.

Sweden's central bank, the Riksbank, recently cut its own key interest rate to 0% from 0.25%. Swedish central planners there think inflation is still too low, and want a monetary policy that's "even more expansionary" as they target 2% inflation.

In mid-October we heard noise from two regional Fed presidents, John Williams and James Bullard, countering expectations for the Fed to take its foot off the gas. First Williams of the San Francisco Federal Reserve said, "If we really get a sustained, disinflationary forecast ... then I think moving back to additional asset purchases in a situation like that should be something we should seriously consider."

Next, the St. Louis Fed's Bullard said it might make sense for the Fed to delay ending its bond-purchase program to halt lowered inflation expectations, and that, "We could react with more QE if we wanted to."

Much more intriguing, however, is research by Citigroup on just how much stimulus the markets need.

Their report estimates that zero stimulus would lead to a 10% drop in equities every quarter, and that central banks need to inject some $200 billion quarterly just to sustain market levels.

Strategists at Bank of America Merrill Lynch figure that another 10% drop in U.S. stocks could lead to a fresh new round of stimulus, QE4.

With all these conflicting signals, what's an investor to expect, really?

Well, now that the end of bond-buying is official, let's look at the Fed's next nemesis: interest rates.

Where will bondholders invest their currency when they're fed up with low interest returns? Stocks, gold, possibly silver and real estate. Looks bullish for stocks to me.

Except that stocks and real estate are already at the top of their "safe" investment values, generally speaking, which leaves PMs as an alluring alternative.