Many investors trying to figure out what stocks do after midterm elections have focused on whether the Republicans will take enough seats in the Senate to gain the majority.

The Republicans are heavily favored to take the Senate. But it won't make much difference. 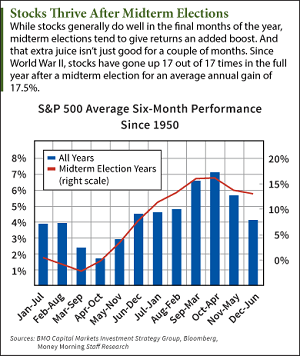 You see, when it comes to what stocks do after midterm elections, it's best to look beyond what might happen this week or next and instead take a long-term view.

History gives us a lot of reasons for optimism.

First of all, the November-April period is the best season for the market, midterms or no midterms. On average, the Standard & Poor's 500 index has risen 7.1% in this period.

But midterms have been a turbocharger, more than doubling the average return to 15.3%. And that midterm boost has been remarkably consistent, occurring 94% of the time.

The real surprise, though, is the impact of a midterm election one year out.

"If you wait 12 months, meaning October to October in that third year [of a presidency], the market has risen 17 of 17 times since World War II, gaining an average of 17.5%," S&P Capital IQ's Sam Stovall told Yahoo! Finance.

"Stocks have rallied post-election regardless of the political outcome... suggesting that the elimination of uncertainty and an end to the political rhetoric is constructive for the markets," Carmine Grigoli, chief investment strategist at Mizuho Securities USA, told USA Today.

And while the stock markets will do well no matter who wins, a Republican win does add a bit more spice to the mix.

Since 1945 the combination of a Democratic president with a unified Republican Congress has yielded better stock returns - 15.1% - than any other variant.

So history is on the side of the markets in more ways than one. But it's not the only element working in favor of higher stock prices...