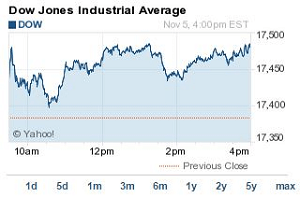 Meanwhile, hard commodities continue to face an onslaught. Gold prices fell to a four-year low, dropping another 1.8% to $1,145.90 per ounce. Silver prices plunged another 3% to hit $15.47 per ounce.

What Moved Markets Today: Energy stocks led the charge on Wednesday after optimism fueled the markets over possible legislative policy that could soon come from a new Republican Senate majority. The most notable name was TransCanada Corp. (NYSE: TRP), which saw shares jump 3.25%. The company is best known for being the principle owner of the long-delayed Keystone Pipeline. Companies also engaged in shipping, storage, and exporting of fuels saw strong gains on the day.

Today's Most Notable Economic News: According to the ADP National Employment report, U.S. private employers created 230,000 jobs in October. This was the highest level in four months and beat analyst expectations. The news provides a boost of confidence in the labor markets ahead of Friday's U.S. jobs report for the month of October. Consensus estimates for last month's ADP figure was 220,000.