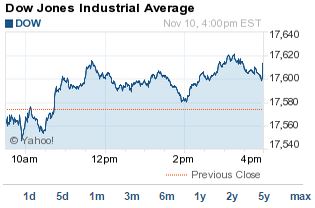 The Dow Jones struck yet another record closing high Monday – its fourth in a row. The S&P 500 likewise hit a new record today.

The VIX, the market's volatility gauge, slipped more than 3% on the day, a sign that the markets are shedding concerns about geopolitical tensions.

What Moved the Markets Today: With elections in the rearview mirror and confidence rising after the U.S. unemployment rate slipped to 5.8%, investors are optimistic about the current state of the American economy. Events in Europe still remain central to investor confidence, but the light slate of economic data combined with positive short-term hindsight had investors looking forward to China's largest e-commerce event, "Singles' Day."