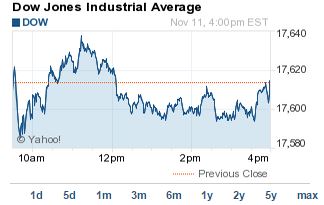 What Moved the Markets Today: With the bonds markets closed, the Dow Jones and S&P 500 saw little movement. The only notable announcement in today's trading session came during a FOX Business interview with Federal Reserve Bank of Boston President Eric Rosengren. Rosengren said the U.S. central bank should stay patient about raising interest rates. Rather than link a rate hike to a specific date, Rosengren argued that the Fed should focus on obtaining the economic results it has been seeking, which includes inflation rising to 2%.