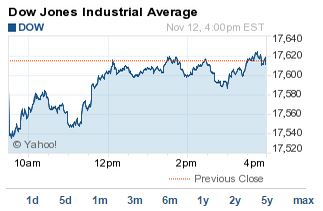 Dow Jones Today, Nov. 12, 2014: U.S. stock markets were flat Wednesday as both the Dow Jones and S&P 500 ended their five-day winning streaks. The Nasdaq bucked the trend to close higher.

What Moved the Markets Today: The Dow Jones turned downward on concerns following settlements by global financial companies over allegations of currency trading manipulation. Sliding oil prices continue to weigh on the S&P 500 and many international oil majors.