A Dec. 6 runoff election for a Louisiana Senate seat pushed a Keystone pipeline vote to the top of Washington's "to do" list. That means U.S. President Barack Obama will be forced to make some kind of decision on the long-delayed Keystone pipeline within the next few weeks.

Senator Mary Landrieu, D-La., has long supported the Keystone XL pipeline. Democratic strategists, knowing the issue is very popular in energy-rich Louisiana, hope to use it to keep her seat blue. 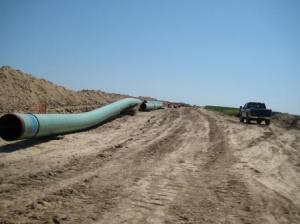 Republicans have supported the TransCanada Corp. (NYSE: TRP) project all along. Now both chambers are planning a Keystone pipeline vote within a week.

Both houses are expected to approve the legislation and send it to President Obama.

At that point, President Obama finally will have to do something.

For six years, he's waffled on the Keystone pipeline. He says he's for "energy independence," but doesn't want to build a pipeline that would contribute to carbon emissions.

Most of all, President Obama has sought to avoid alienating environmentalists, a small but powerful Democratic constituency. But polls show that 61% of Americans - and nearly half of all Democrats - support the Keystone pipeline.

The president has managed to put off a decision by saying he needs to see the results of studies that will show whether the Keystone XL pipeline will harm the environment.

A bill on his desk puts President Obama in a tough spot. Signing the bill will enrage environmentalists. But vetoing it will appear to contradict the will of the American people. And it would hurt Sen. Landrieu's reelection odds.

On the day after the midterm election, the president hinted he might reject the Keystone pipeline, but left himself lots of wiggle room:

Landrieu, however, is optimistic.

"We believe the bill we drafted could receive support in the House of Representatives and get the president's signature," she said.

Meanwhile, White House Press Secretary Josh Earnest said that "our dim view of these kinds of proposals has not changed" but did not say that the president would veto the bill.

The Bottom Line: The Keystone pipeline vote creates a political pickle, and President Obama has a history of doing what is politically expedient. The odds are he signs the bill.

The Keystone Pipeline Winners: Approval of the Keystone pipeline will boost at least a dozen energy stocks. When completed, the massive project will move 830,000 barrels of oil a day. Here are the companies that will benefit the most...