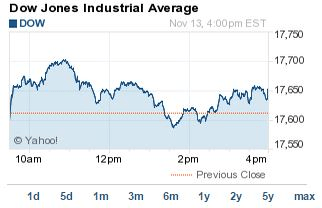 The DJIA hit yet a new record closing high Thursday - its 25th this year - to finish a day of up-and-down trading. The S&P 500 rose one point, just short of another record close.

The VIX, the market's volatility gauge, jumped 5% on the day.

What Moved the Markets Today: The markets were on the rise despite the continued onslaught against oil prices on the international front. Crude oil prices fell again after OPEC announced it expects weaker demand in 2015 and Saudi Arabia remained quiet about production cuts. Brent crude, the global benchmark priced in London, fell below $78 per barrel. Meanwhile, West Texas Intermediate crude, priced in New York City, fell below $75 per share, its lowest level since September 2010. Falling prices continue to drag down energy stocks around the globe.