What Is Net Neutrality?

Net neutrality is the idea that data on the Internet shouldn't be regulated by the government or Internet service providers (ISPs). Think of it as an extension of freedom of speech.

An "open Internet," where data is treated equally and without third-party interference, is better for free communication, conducting business, and more.

By contrast, a "closed Internet," where the government or corporations favor or disapprove of certain data, would stifle communication, business, and more.

From now on, Internet service providers (ISPs) like Comcast Corp. (Nasdaq: CMCSA) and Verizon Communications Inc. (NYSE: VZ) are prohibited from speeding up access to some websites just because those sites are willing to pay for a faster connection.

Instead, the Internet will be treated as a public utility, like telephone services. Customers will be able to browse websites equally - from large corporate sites to your sister's cooking blog - without ISPs throttling load times of those they wish to leverage.

The Feb. 26 decision followed a Feb. 4 Wired op-ed in which FCC Chair Tom Wheeler came out in full support of net neutrality. Wheeler's position came as a surprise to some. He is a former lobbyist for cable and cellphone industries.

"This is the closest the agency's come to a mic drop in a long time," daily newsletter The Skimm quipped after the move.

That's not an overly dramatic assessment.

You see, the FCC's weighty decision marks the most significant rewrite of Internet rules of all time.

Here we dig into exactly what the net neutrality debate is.

Get the net neutrality pros and cons, see why the change is going to affect Americans for generations, and then  join us on Facebook to voice your opinion... 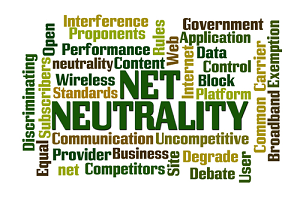 A Jan. 14, 2014, decision by the U.S. Court of Appeals for the District Columbia Circuit set the stage for a hot net neutrality debate over the past year. The court ruled ISPs are free to manage traffic as they see fit, without interference by the FCC.

Their plan was to leverage money from the video streaming company - and it totally worked. In late February 2014, Netflix paid Comcast an undisclosed sum to take the handcuffs off its data for a number of years.

Warning: You're losing money every day and you don't even realize it... Every investor is hard-wired to do three things that kill returns. Do you know how to avoid them? Find out what they are, plus the single-best investment strategy for maximum gains, in our free guide: Make 2015 Your Wealthiest Year Yet

That's not all. Since the ruling, the big ISPs - particularly AT&T Inc. (NYSE: T) - have submitted a slew of patents that try to capitalize on the FCC's limitation.

Crucially, the court's decision left wiggle room for the FCC.

You see, the FCC has the power to reclassify ISPs as "common carriers." Common carriers are private companies that sell their service to everyone on the same terms, regardless of location and other differing factors. This power ties back to the fact that Congress originally created the FCC to regulate phone companies, to make sure people had equal access to phone service at reasonable prices. The same idea applies to utilities like water and electric.

Reclassification of ISPs as common carriers is a big deal. That's what has set up so much dissonance among ISPs, Capitol Hill, and the public - and billions of dollars are at stake.

A Look at Both Sides of the Net Neutrality Debate

Net neutrality opponents fear the reclassification of ISPs as common carriers will open the door for government control and socialism.