Silver may be trading near a five-year low, but that hasn't hurt demand. Quite the opposite, in fact.

Investors are buying silver coins at a robust pace.

As many as 5 million one-ounce American Silver Eagles go out the U.S. Mint's doors during a good month. But on Nov. 5 the Mint ran out of inventory. The Mint suspended sales after selling 2 million ounces in just two hours.

October U.S. Mint sales were 5.79 million ounces, up 40% over the previous month, the highest level since January 2013.

With coin sales near record highs, supplies are drying up, and premiums are soaring. Buying Silver Eagles right now from a coin dealer will run you about $20.50 each... if you can find them.

"The premiums of Silver Maple Leaf bullion are going to rise soon, because dealers cannot get their hands on the coins," said Scott Spitzer, chief operating officer at Manfra Tordella & Brookes, one of the largest U.S. coin wholesalers in New York.

But there's still another way to invest in silver without the costly premium. Read on to find out how to buy silver at a premium that's 95% less than the going market rate.

How to Buy Silver at the Best Price

Many investors have taken refuge from higher premiums in silver exchange-traded funds (ETFs).

In fact, retail investors have pushed the iShares Silver Trust (ETF)'s (NYSE Arca: SLV) holdings up to 345 million ounces, the most in more than three years, according to The Wall Street Journal. This is despite the fact that share prices are down 17% so far this year. 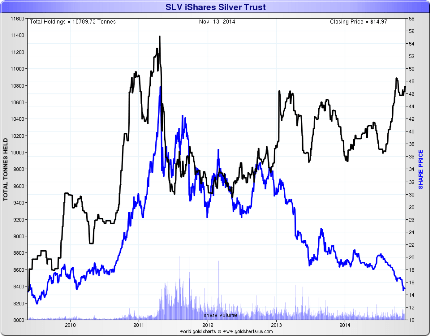 But the turnoff here for many silver buyers is that ETFs don't offer physical silver ownership. These silver buyers want to hold coins and bars.