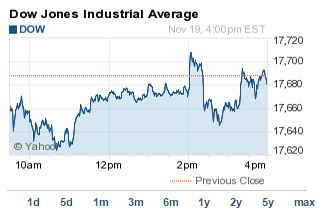 The Dow Jones today dipped after the Federal Open Market Committee released minutes from its October meeting, at which the central bank ended its third round of quantitative easing.

What Moved the Markets Today: The FOMC said it might remove the words "considerable time" when planning its schedule for a rate increase. The central bank is concerned about inflation rates remaining below 2% "for quite some time." The United States is going in a much different direction on monetary policy than other economies like the Eurozone, Japan, and China, which are all increasing stimulus measures. That divergence has added fuel to a strengthening U.S. dollar and declining gold, silver, and oil prices. It's also encouraged an influx of foreign capital into U.S. markets.

[Note: Don't let FOMC meeting minutes cloud your investment decisions – here's how to invest without the distraction of Fed noise.]

Housing starts slipped 2.8% in October, according to the U.S. Department of Commerce. Housing start growth has remained volatile since the beginning of the summer. Still, building permits, which are a forward indicator of future construction, hit their highest monthly level in six years.