The Dow Jones Today soared 91 points on news the Chinese central bank plans to slash interest rates and Europe will likely engage in stimulus action soon. The Dow and the S&P 500 both hit record highs on the day. The VIX, the market's volatility gauge, slipped more than 4% on the day. 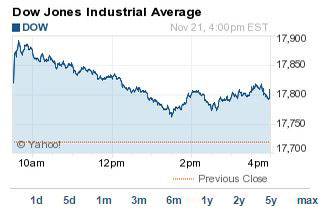 The People's Bank of China slashed its one-year deposit rate by 0.25% and its one-year loan rate by 0.4%. The ECB president said his unit is prepared to engage in asset-buying to help inflation reach the bank's set target. The news sent commodities north and fueled optimism that these regions will continue to rely on centralized planning and cheap money to spur growth.