Silver prices in 2014 have been pummeled in this second half. Just look at the accompanying silver price chart.

There are two main headwinds suppressing silver price gains right now. Each has a trigger point to watch for – a signal that this bearish period is about to reverse. That's when the price of silver will begin its rebound. 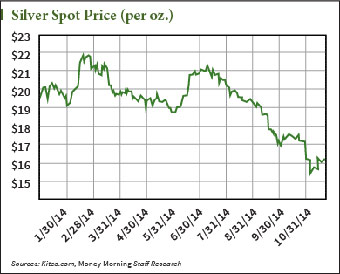 Here's what they are so investors can prepare for silver market moves heading into 2015.

The story with silver speculators has been the same throughout the year.

Speculators will take out short contracts on silver in droves, and that sell-side pressure will push prices down.

This has been the case the whole year. It was most obvious between February and June.

At those high prices, speculators began mounting a larger short position each week.

This pushed prices down, but then the same speculator activity reignited a silver rally. With short positions so high and prices so low, speculators wanted to capture profits. They bought long to cover their shorts.

By July 11, the massive short covering – when short sellers shed about 163 million ounces of silver in shorts – propelled silver prices up 14% to $21.445 an ounce.

The month-long short covering that boosted prices also brought short positions to lows not seen since February 2013. From there, the pattern started over and short positions mounted again.

That's where silver prices are now.

This time, they have been taken to even newer highs, almost 260 million ounces short by late October.

And prices began to fall below $16 for the first time in four years.

And while there hasn't been a consistent short covering session to propel prices up, the reality is, shorts can't be at this level for much longer before it does happen.

And that's when prices will see a jump.

Trigger Point: Since reaching a peak in late October, short positions have fallen two weeks in a row. However, this most recent episode of short building hasn't followed the same pattern it has for the rest of the year. Shorts hit a new all-time high on Sept. 30, and after a slight decline in those positions, speculators reestablished a new high on Oct. 28.

This means that the shorts haven't yet been squeezed. We'll need to see at least two more weeks of short covering to be more confident there is enough to sustain a silver price rally.

Money Morning Members can see the next silver price headwind for free, in addition to the important trigger point that will indicate a bullish reversal of silver's current slide.