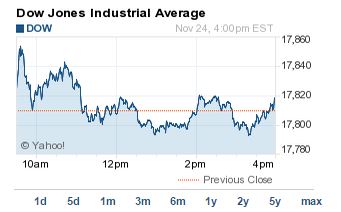 The Dow Jones today hit a new record, adding 7.8 points on a fresh round of mergers and acquisitions and news that central banks around the world are prepared to introduce new stimulus measures. The S&P 500 Volatility Index (VIX), the market's fear gauge, slipped 2.7% on the day.