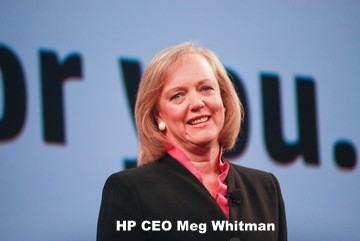 The Q4 Hewlett-Packard earnings (NYSE: HPQ) released today (Tuesday) after the market close were in line with expectations, but put a less-than-flattering light on a five-year turnaround plan that has yet to show convincing results.

The fourth-quarter earnings were exactly as forecast, coming in at $1.06 a share, a 5% increase from the same quarter a year ago. Revenue was $28.4 billion, falling just short of expectations for sales of $28.76 billion. Revenue was down 2% from the year-ago quarter.

Hewlett-Packard stock dipped about 1% in after-hours trading to $37.34.

"I'm excited to say that H-P's turnaround continues on track," said Hewlett-Packard Chief Executive Officer Meg Whitman, which is something she says in pretty much every earnings announcement these days. Although she did add, "There's still a lot left to do."

But the key to Hewlett-Packard's earnings lies in how each of its segments performed.

Investors are paying particular attention to HPQ's individual businesses now that the company is set to split in two next year.

Announced in early October, the idea is to spin off the legacy printer and PC business into a company called HP Inc. The corporate hardware, cloud, and software businesses, meanwhile, will become known as Hewlett-Packard Enterprise.

While the HPQ earnings had a few bright spots, most segments again declined compared to the same period a year ago. While not catastrophic, at some point soon those numbers need to start turning positive.