Money Morning Global Resource Specialist Peter Krauth recommended Goldcorp back in April when GG stock was trading at about $24.50. Goldcorp was trading this week at around $21, which means it's become an even better bargain.

Founded in 1954, Goldcorp is one of the world's top precious metal miners. It's involved in the operation, exploration, development and acquisition of precious metal properties in Canada,

the United States, Mexico, and Central and South America. The Vancouver, British Columbia-based company produced 2.67 million ounces of the yellow metal in 2013, the fourth-highest amount of all the gold miners in the world. Goldcorp employs about 19,000 people and has a market cap of $17.4 billion. The CEO is Charles A. Jeannes. 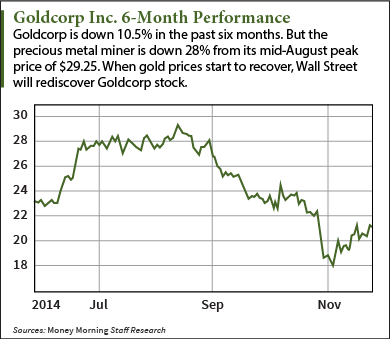 Gold mining stocks trade at the mercy of gold prices, and it's no secret gold prices have struggled in recent years. Since peaking at $1,921 an ounce in 2011, gold prices have dropped almost as much as 40%, dipping below $1,150 earlier this month. Gold has come back a little, but is still hovering around $1,200 an ounce. Adding to the company's woes were lousy third-quarter earnings. Earlier this month GG reported a 63.2% plunge in earnings per share (EPS) from the same period a year ago. Goldcorp's EPS of $0.09 was just half of the $0.18 Wall Street had expected. Goldcorp stock touched a 52-week low of $17.01 on Oct. 31.

But GG stock is about to get a massive tailwind...