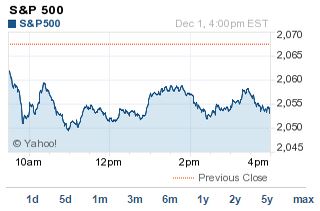 The S&P 500 had its biggest one-day drop in more than five weeks. The Nasdaq suffered its steepest decline in seven weeks. The S&P 500 Volatility Index (VIX), the market's fear gauge, jumped 7.2% on the day.

What Moved the Markets Today: The global retreat of oil prices halted during today's trading session. Oil prices had their best one-day gain since August 2012, with West Texas Intermediate gaining nearly 5%. Brent crude jumped more than 4%, although the broader energy sector was down 0.4% on the day.

However, markets also contended with a rash of weak retail reports from the Thanksgiving holiday weekend and a number of global manufacturing indices that signaled weakening Asian and European growth in November. Gold prices jumped above $1,200 for the first time since October in the wake of a credit downgrade of Japan's economy by ratings agency Moody's.