"They couldn't possibly be that stupid"…

That's what my friend John, a London-based trader, said when I called him to verify that he saw what I was seeing on my own trading screens here in the wilds of Oregon.

It was Tuesday morning, November 4, and nearly everything in the energy complex was red.

November West Texas crude oil had dropped to $87.31/barrel, while Brent crude oil set a new two-year low at $91.53. Prices have since dropped to four-year lows of around $75 and $78, respectively.

They could fall even further – all because Saudis started another oil price war.

OPEC's largest oil producer had just announced that they were cutting oil prices for customers in the United States. The idea is to squeeze margins on U.S. shale production to where it's not profitable to produce.

Naturally, the Saudis fiercely deny the notion of a price war. But you don't have to be a genius to read between the lines.

The Saudis are very frustrated that they are losing control over pricing power they've held for decades. It's annoying them to no end. So, they're fighting back the only way they know how in an attempt to shift the balance back in their favor – by starting a price war with the United States. Unbelievably, they think they can win!

My take is that the Saudis have just made the biggest strategic "pricing error" in the kingdom's history. And, in doing so, they've actually cleared the way for America's shale energy boom and opened up a killer opportunity for this month's recommendation in particular.

The Saudis Just Picked a Fight They Can't Win

In the late 1980s, the House of Saud brought the rest of the world to its oil pricing knees by increasing output and lowering prices to the point where global producer profitability got crushed.

At the time, they dropped prices so low that even North Sea producers like BP Plc. (NYSE ADR: BP) and Statoil ASA (NYSE ADR: STO) felt their wrath. Profitability vanished because nobody in the global energy complex had enough capacity to offset their actions.

This time around, we've got shale oil.

Industry Reaction                  U.S. shale oil producers are shrugging off the Saudi price war. Drillers like Pioneer Natural Resources and Continental have indicated they have "no plans to curtail production." EOG Resources CEO told the Financial Post they can make money at $40/barrel. ConocoPhillips and Marathon Oil have noted that shale formations from "Texas to North Dakota are among the most profitable they have," according to Bloomberg.

Like generals who are prepared to fight the last war, Saudi ministers have totally underestimated the impact of this development. They believe that U.S. producers will fail and buyers will come a-running if they jack output and drop prices below $90/barrel. What they're missing is that the cost of shale oil production is already lower than that… and getting lower all the time. The latest data from U.S. producers suggests that they can operate profitably at $65-$69/barrel and that the threshold is dropping daily as production technology improves.

That's because the majority of U.S. shale oil producers have hedged oil prices, already contracted rigs, and long ago written down the cost of the acreage they need to drill.

In reality, U.S. shale oil production will climb for years to come and is now the world's "swing capacity" – meaning it can influence marginal oil pricing that used to be the Saudi's weapon of choice to increase or decrease prices almost at will.

Interestingly, I've seen very little written about this in the press, save one report from Citi. It notes that shale production costs could be "in the significantly lower band of $37-$45/barrel." My own take is that even $30 may not be out of the question.

This chart shows the extent of the Saudi miscalculation.

See that big, dark green hump up to the right? That's U.S. shale.

Output hit a record 12 million barrels/day for the first time in October, even amidst prices tumbling. Production can climb for years to come and the more the Saudis posture, the faster U.S. producers will react.

The other thing to consider is a data point from the IMF. That agency estimates that Saudi Arabia needs oil prices to average $89/barrel to balance their budget. Essentially, that means the Saudis are punishing themselves. The country cannot withstand a long-term drain on its finances. Other OPEC producers are going to fare even worse.

It's gonna be painful for them…

And profitable for us. 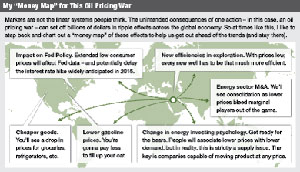 Most investors are going to try and play that by buying shale exploration and drilling stocks, but those companies are still tied to the price of oil. No doubt there will be big profits to come, but the journey is going to be bumpy if the price of oil keeps dropping.

The better way to play this is to buy into so-called midstream assets.

These are the companies responsible for gathering, processing, and piping oil around the country. They're like toll highways. You dump crude in one end of the network, transport it, and unload it at the other, and they collect the "toll." The actual price of the crude and natural gas being carried is largely moot.

Most of these things are structured as Master Limited Partnerships (MLPs). These are great for investors, because they offer both the liquidity of a common stock and the tax benefits of a limited partnership. Most pay very high income to boot.

My favorite at the moment is FISH.

The articles you post do not seem to have a date. If there is one anywhere it must be either buried or in small print that is hard to find. Timeliness means a lot in stock news
so please put dates of publication on things!

All stories have dates, right next to the bylines.

Keith, I think that you are missing the real reason that the Saudis are dropping the price. Ronald Reagan asked the Saudis to drop the price of oil when he was trying to break the back of the Soviet Union. It had a huge impact on the USSR and was a contributing factor in the ending of the cold war. I believe that the Saudis are doing the same thing again, this time at Obama's request, in order to put serious pressure on Russia, combined with the sanctions, to force Russia out of Ukraine. When Russia invaded Crimea, it wasn't for the Russian speaking people. I mean, since when does Vlad Putin give a rats behind about anyone other than his business cronies. No, they discovered huge new oil and gas reserves in Crimea, under the sea of Azov, and in the east of Ukraine. Russia could not allow Ukraine to develop those reserves because Russia would have then lost Ukraine as one of their biggest customers and Ukraine would have been able to compete with Russia for Europes oil and gas business. So it is all about money. And to stop Russia from profiting from their theft of those oil and gas reserves, Saudis are pushing down the price of oil. Russia thinks that this will only last a little while and that they can weather the storm, but don't be surprised if this price drop lasts until 2016.

I think you are completely right.
With one exception – USA are baking more chickens on one roast: Russia, Iran, Islamic State and Venezuela. And as the byproduct, they support their allies dependent on the suppliers mentioned above (think Europe). Probably China is also happy about current prices and possibility to secure very *good* deals with Russia and others.