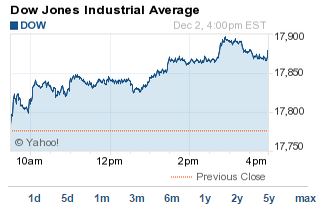 What Moved the Markets Today: The U.S. dollar is at its highest level since March 2009. The greenback is now at a 28-month high against the euro and a seven-year high against the Japanese yen. Stocks jumped again today as the auto sector continues to show signs of significant recovery and energy shares show some resiliency to OPEC's production decision. Shares of Exxon Mobil Corp. (NYSE: XOM) and Chevron Corp. (NYSE: CVX) were both up about 2% in the day.