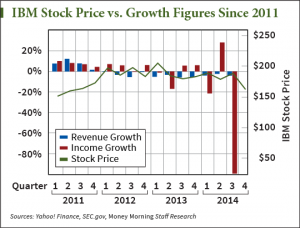 The troubles that plague IBM stock are not a mystery. We know what's hampering the company.

But there are signs IBM will break free of this downdraft. We recently looked at how harnessing the potential of "Big Data" will be key to IBM's turnaround. But that's not the only way - there's another major industry that IBM can tap into...

First, a look at how IBM got to this point...

IBM's harshest critics could have told you a while ago where the company was headed.

In 2007, IBM began a large-scale restructuring plan to eliminate wasteful spending and help the bottom line. This involved layoffs, outsourcing, and divestitures.

Former Chief Executive Officer Sam Palmisano was in charge. In 2010, he had an overly optimistic 2015 projection for IBM's earnings-per-share (EPS) to be $20.

This drive for earnings growth kept the IBM culture of divestiture alive and well when Virginia "Ginni" Rometty took over as CEO in 2012. The $20 EPS figure became her problem.

But after a miniscule 0.3% revenue growth gain in Q1 2012, IBM began a trend of red ink that has persisted. The company now has seen 10 straight quarters of falling revenue.

Despite this, profits still initially saw quarterly year-over-year growth. There was one small loss in Q3 2012 under Rometty, but that was sandwiched between two quarters of around 6% earnings growth.

In Q1, IBM reported not only a 5% decline in sales, but also a 1% decline in earnings. The day these numbers came out - April 19 - marked IBM stock's worst one-day performance under Rometty. Shares plunged 8.3%.

This was the day markets began to understand IBM's real troubles. IBM's layoffs and divestures were now not even helping the bottom line. The company needed to focus on growth areas.

The next earnings release saw revenue down 3.3% and earnings down 17%. Earnings rebounded slightly and grew around 6% for the remainder of 2013 - but revenue continued to fall.

This year was even more painful.

A 21.4% drop in earnings for the first quarter and a 99.6% drop in the third quarter forced Rometty's hand.

On Oct. 20, the CEO tasked with turning the company around was forced to abandon Palmisano's $20 EPS pledge. Shares plunged 7.1% on the day. They have since traded around $160, down from $180 before the announcement.

This announcement and focus redirection is a great sign for IBM stock in 2015...